*This is a super late post! Exactly 5 months ago! Me zo lazeh!*

When I was a kid, my family went to the beach and tried boating. I could remember how scared I was then, my hands gripping tightly on my mother’s arms. My uncle, who was always the playful one, decided to move the boat to scare us even more. And that added to my trauma.

From then on, I had been wary whenever boat and sea are being brought up during family and barkada beach trips. I could not remember  the time when I stopped getting afraid of riding a boat but I guess I just got the hang of it after multiple trips (Hooray for facing fears!) and the presence of life vests…and, ahm, my swimming skills (meh, can’t help it! hihi).

So when I rode, for the first time, a ferry boat in Hong Kong, I was chillax-ing! For one, it’s huge compared to the boats I first tried and I was just so excited to see the Noah’s Ark. But it wasn’t a smooth sailing ride. It was like a roller coaster ride!!! The waves and wind made me dizzy and I swore I wouldn’t ride a ferry boat ever again.

But late last year, after several tweets my friends and I exchanged, we finally decided to go to Corregidor one fine Sunday and explore the island! 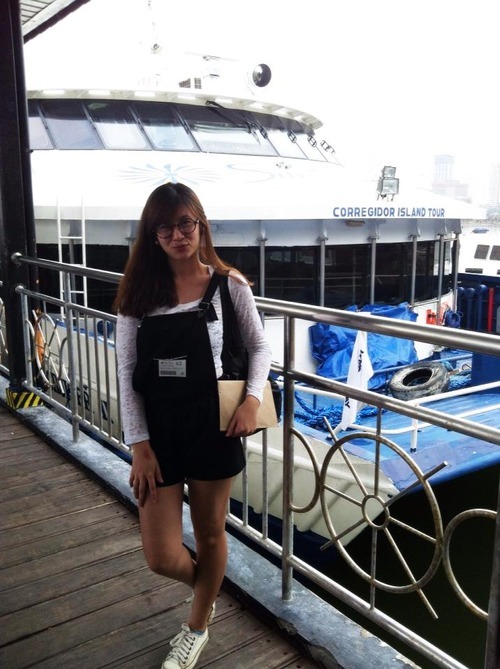 And to get to the island, tourists could only ride a….ferry boat!

Thanks to Sun Cruises and the fine weather, I felt like I wasn’t in the middle of the ocean at all! I didn’t even feel like it was moving! Oh, it was a peaceful one & a half hour voyage!

The island itself was an enchantment! We chose the letter C package which was the Corregidor HIstorical Walking Tour. It was a half day trekking around the island!

After our boat had docked, a coaster fetched our group and led us to our first stop: The Battery Way! 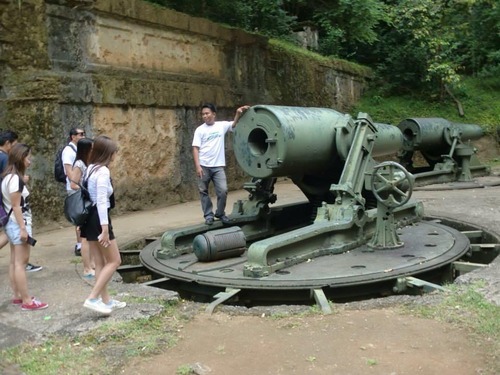 Our guide, who was really nice and entertaining, told us that these 12-inch huge mortars were fired against the Japanese soldiers and could make 360 degrees turn and hit targets in any direction in Bataan during the war. The four mighty mortars. Their shells were kept on now creepy rooms which were so thick the accidental explosions won’t damage hugely.

After taking photos, the trek had finally started. Our guide led us uphill and found ourselves, minutes later, outside an abandoned hospital! The island’s cross-shaped hospital which could house 1000 patients in double decks. Original markings inside one of the bathrooms of the hospital. 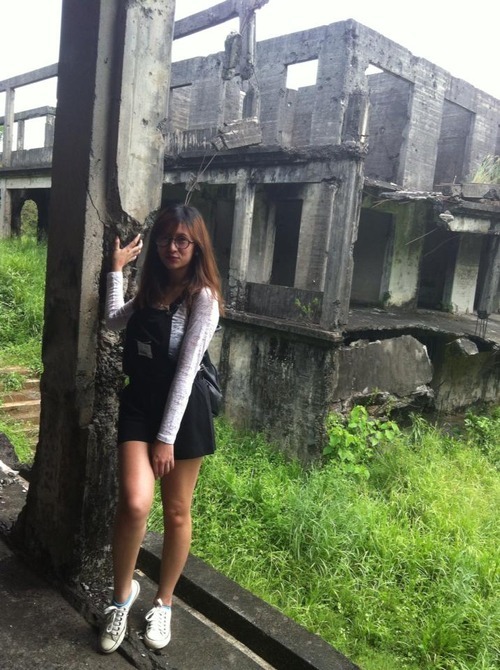 This hospital didn’t give me the chills as I would normally feel when passing the abandoned hospital in Clark.

The tour went on and the guide took us in the recreational area of our soldiers. The swimming pool where our soldiers used to dive in during their breaks from their drills was so deep!!! The ruins behind me was so beautiful you wouldn’t want to imagine they were made like this because of bombs  dropped on them. Saw a parked trolley and played around! Kid at heart! 😀 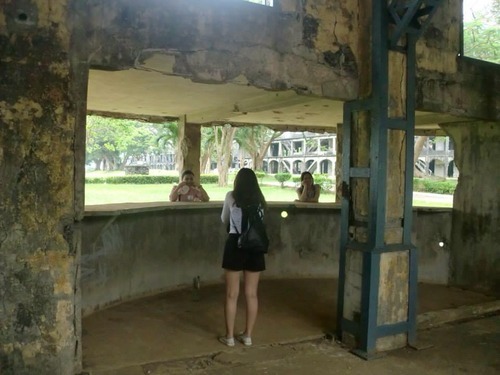 The popcorn booth at the Cine’s entrance! What flavor po? Theater was solely for American soldiers where they watched newly released movies from America. The place where our single soldiers lived during the Fil-American period. This memorial was built to honor the lives of the soldiers who fought during the war against the Japanese.

These places were situated on the topmost part of the island and we enjoyed walking because of the cool breeze fanning our faces letting us feel refreshed after minutes of trekking.

We also visited the museum which housed artifacts used during those times. 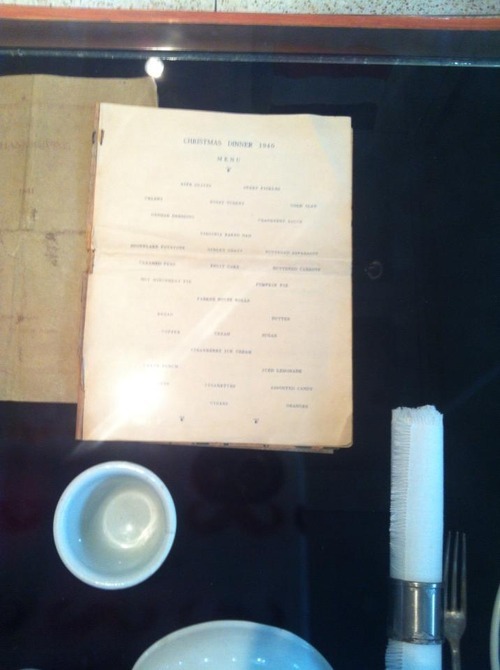 Christmas Dinner Menu!!! I suddenly became dreamy and imagined I was there during the 40s exchanging convos with the generals over dinner. Haha. 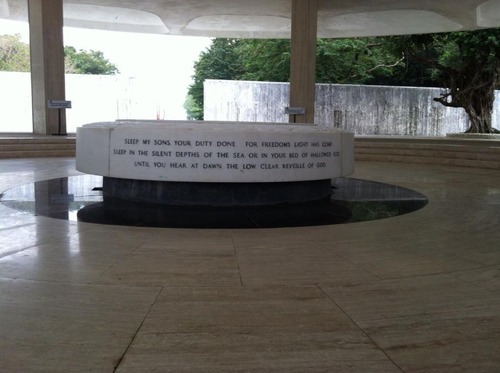 The memorial dedicated to the soldiers who fought for the country and its freedom.

And finally, after minutes of hiking, we arrived at the light house! 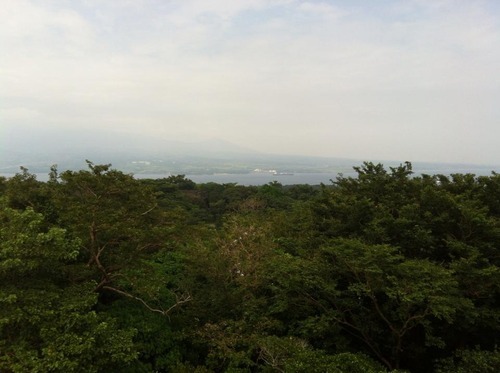 The view on top of the Light House where you could see the rest of Corregidor, Manila Bay, the South China Sea and the neighboring provinces of Bataan and Cavite.

We stayed for quite some time at the top letting the air into our lungs and admired the view that was before us. It was so serene…so peaceful to see greens and blues and whites.

When we had our fill, we climbed down the lighthouse and head for the CR to freshen up and bought bottled waters to quench our thirst.

Then our ride arrived to take us back to the hotel where we had our lunch. Surprisingly, we had a chance to ride the trolley which wasn’t included in our package! What a treat! The trolley that was designed after the original trolley used during those times as the means of transpo by our soldiers. The high ranked soldiers were given the top priority then next were pretty ladies daw! Imagine! Pretty ladies over children! I don’t know if our guide was just kidding! Lalalaaa.:D 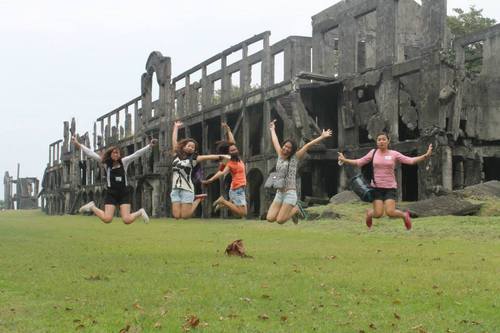 At exactly 4pm we arrived at the terminal of Sun Cruises which was near the CCP. Oh, we had fun!